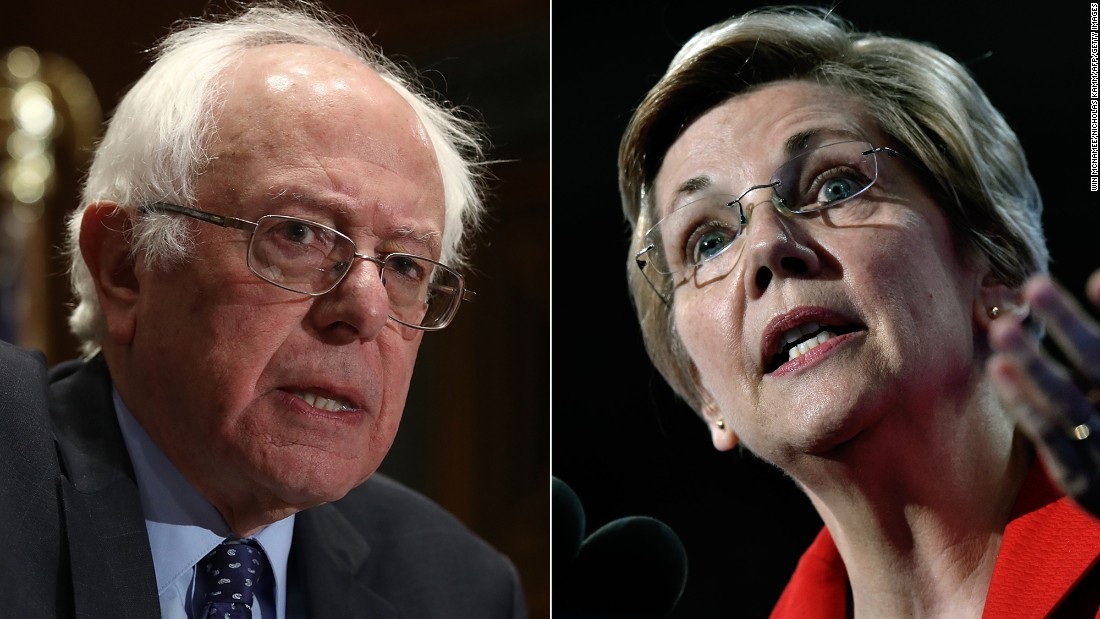 (CNN)Higher education has become a focus of the ideas primary waged on the left flank of the Democratic presidential primary.

There are also multiple proposals to help with education for children by raising teacher pay (Sen. Kamala Harris of California), providing free lunches (Sanders and former HUD Secretary Julian Castro) and providing freeor subsidized child care (Warren). Sen. Cory Booker of New Jersey has an interesting proposal to give every young child a nest egg they could use on higher education. But it is the proposals from Sanders and Warren that may get the most attention, particularly among the young voters Democrats hope will turn out.

How to cancel student loan debt

Sanders unveiled a plan for mostly free tuition before the presidential campaign, but Warren was the first to propose massive debt forgiveness. Sanders has now joined her, but there are key differences in their plans.
Warren would forgive some debt, she says, for 95% of the people who have it. It would focus on people at lower incomes, giving $50,000 in debt forgiveness to every person with household income under $100,000.
The benefit would then slide by $1 for every $3 additional of income. Someone in a household with $160,000 would get $30,000 and someone in a household with $250,000 would get none. The main target of this benefit would be debt held by the US government, but she says private debt would also be eligible. She says the total cost of the onetime benefit would be $640 billion.
Sanders’ plan is less progressive, more generous and more than twice as expensive. He’d enact a onetime cancellation of the $1.5 trillion to $1.6 trillion in student debt held by all Americans.
He says the plan would address racial and gender inequality, because women and racial minorities tend to hold more student loan debt, and would help struggling Americans with as much as $3,000 per month that’s currently going to make payments on student loans.
Both Warren and Sanders would increase spending on Pell grants for non-tuition expenses and funding for schools that target minority students, like historically black colleges and universities.

In addition to canceling debt, Sanders and Warren would seek to make public school tuition largely free.
Sanders would pay $48 billion per year to cover two-thirds of tuition at two- and four-year public colleges and universities. He’d put new requirements on public schools to qualify for the money.
Warren would similarly pair with states to split the cost. Not all states might take part, as occurred with the Affordable Care Act, when the government partnered with states to expand Medicaid coverage. In that case, the federal government covered more of the cost.
Other Democrats have less generous proposals.

Opposition among Democrats to free college

Some Democrats have rejected these types of proposals.
“As a progressive, I have a hard time getting my head around the idea of a majority who earn less because they didn’t go to college subsidizing a minority who earn more because they did,” said South Bend, Indiana, Mayor Pete Buttigieg, who owes more than $130,000 in student loans, back in April.
Other critics agree it’s unfair for the people who have diligently been working to pay loans off but would see no benefit under such programs. Buttigieg would rather expand Pell grants to help low-income students.
Sen. Amy Klobuchar of Minnesota is also opposed. She would do things like freeze loan rates and, like former Vice President Joe Biden, has backed free community college.
Biden has suggested support for free college in the past and includes free community college in his own proposal, but he does not have an announced plan for four years of free tuition.

How to pay for it

Sanders would institute a tax of 0.5% on stock trades — 5 cents on a trade of $100 — which he says would raise $2.75 trillion over 10 years.
Warren’s tax is something else entirely and would do onits own to combat inequality. She’d place a 2% tax on household wealth over $50 million and a 3% tax on wealth over $1 billion. That’s a game changer in US tax law, since it would specifically target the wealthy, and it would be something new for the US government to track wealth, as opposed to income, before a person dies.
It would be a controversial thing indeed, but it’s not without support even among the nation’s billionaires. An open letter from the likes of George Soros and others backed the idea of a wealth tax Monday.

Is this a crisis?

As CNN first reported in April, there is bipartisan agreement that something must be done about student loans, although for different reasons.
Conservatives like Secretary of Education Betsy DeVos have called the state of student loans a crisis because they represent such a large portion of the US balance sheet.
The federal government basically took over the student loan industry in 2010, when it became the lender for federally guaranteed student loans. It currently holds more than $1 trillion in student debt. In fact, student loan debt is the federal government’s largest single asset, according to the Treasury Department’s annual report.
But it is not making a ton on that investment, according to several reports from the Government Accountability Office and the Congressional Budget Office, especially since students can now tie loan repayment to income and lengthen the terms of their loans.

Student debt has become a topic of national concern in a very short time.
ANew York Federal Reserve Bank study on household debt released in March found that student debt represented a larger piece of Americans’ personal balance sheets than credit cards or auto loans. It’s still dwarfed by home loans, but more people are borrowing for college, they’re borrowing more money and they’re taking longer to pay it off, according to the report. The number of borrowers climbed from 2.5 million to more than 4 million between 2005 and 2015 and the average amount borrowed grew from $20,000 to nearly $35,000.
The growth in borrowing was compounded by the Great Recession, when many out-of-work Americans went back to school.

A separate report by the Fed, which was published in January and cited by Warren when she announced her plan, argued there is a direct correlation between a drop in homeownership among younger Americans after the Great Recession and a rise in student debt.
That was also the time when strapped states slashed funding for state-funded colleges and universities. Most states have not returned to pre-recession spending on higher education, according to the Center on Budget and Policy Priorities, a progressive think tank. This lack of government funding and rising costs have been passed on to students.

Who borrows the money?

Student loans are felt disproportionately in minority communities and among low-income Americans. According to the Center on Budget and Policy Priorities report, in data cited from 2012, more than three-fourths of students from the bottom quarter in income had student loans, versus a little more than half of students from the top quarter of families income-wise. More than 80% of African American students graduating from public institutions had loans, far more than the 64% of total students.
First-generation students are more likely to fall behind on payments, according to the Fed in 2016 — 11%, compared with 5% of people whose parents went to college. Just 5% of white students who take loans for their own education will fall behind, compared with 14% of African American students and 27% of Latino students.

Not everyone agrees there is a crippling student loan crisis in the same stark terms as Warren and Sanders.
“My primary objection to what Warren proposed is it’s spending a lot of tax dollars for people who probably don’t need it,” said Beth Akers, a senior fellow at the Manhattan Institute, a think tank that promotes free market ideas. She argued back in April that even with Warren’s proposed cap of $250,000 for any sort of loan forgiveness, the plan would be giving a lot to people who are paying off their loans just fine.
Clearly there are people who will need help repaying their loans, but the government already has those systems in place, she said.
“A lot of times we’re talking about the Warren plan relative to this imaginary status quo where students’ loans are crushing, inescapable things, when in reality we actually have a very robust safety net for borrowers that ties payments to their incomes and makes them eligible for forgiveness if they have low income over an extended period of time,” she said.
DeVos has proposed cutting elements of those programs in every year of the Trump administration.