When Republicans in the U.S. Senate fell one vote short in July, it looked like their seven-year bid to undo the Affordable Care Act, aka Obamacare, had failed. Now there’s an effort to see if a different repeal bill, known as Graham-Cassidy, can make it through the Senate before a Sept. 30 deadline. Proponents say it would put reshaping health insurance in the hands of the states. Its detractors call it the same old steep cuts in coverage in a new wrapper.

1. What would Graham-Cassidy do?

The proposal by Senators Lindsey Graham of South Carolina and Bill Cassidy of Louisiana would replace Obamacare’s insurance subsidies with lump-sum "block grants" to states, which would decide for themselves how to help people get health coverage. The bill, if signed into law, would spell an end to the Obamacare requirements that individuals obtain health insurance, that most employers provide it to their workers, and that insurers can’t deny coverage or charge more to people with pre-existing medical conditions. The proposal would end the Obamacare tax on medical devices while keeping others intact, including taxes on the wealthy, to fund the block grants. Those grants would expire in 2026.

2. How is it different from previous repeal attempts?

The Graham-Cassidy bill leaves to the states many questions that other Republican proposals would have had the federal government handle, like setting the size of insurance subsidies. It also strives to equalize Medicaid spending between states, and would cut the program in the mostly Democratic states that expanded it under the ACA, while sending billions to the mostly red states that didn’t.

In addition to ending Obamacare mandates, it would cap spending on Medicaid, the huge federal program for the poor and disabled. 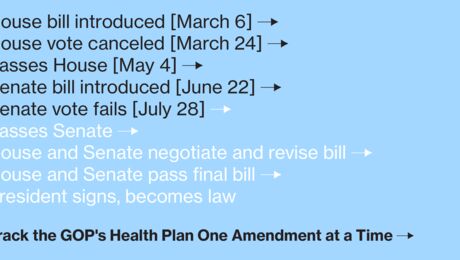 4. Why does the bill face a deadline?

Republicans hold 52 seats in the 100-member Senate. They want to use a procedure, budget reconciliation, that allows legislation to pass with a simple majority rather than the 60-vote supermajority required to move most bills to a final vote. The Senate’s parliamentarian has ruled that the ability to use reconciliation under the current budget resolution ends when the fiscal year expires on Sept. 30.

Graham-Cassidy was formally introduced last week. Major bills usually aren’t voted on without a score from the Congressional Budget Office, which will assess whether Graham-Cassidy meets the standards for a simple-majority reconciliation measure. The CBO said Monday it will offer a partial assessment of the measure early next week but won’t have estimates of its effects on the deficit, health insurance coverage or premiums for at least several weeks.The parliamentarian also has to rule on whether any of its provisions aren’t eligible for reconciliation, which is supposed to be limited to tax and spending provisions.

6. What are its chances?

Uncertain. Since Democrats have unanimously opposed efforts to repeal the ACA, Republicans need the support of at least 50 of their 52 members. (Vice President Mike Pence, in his role as president of the Senate, would cast the tie-breaking 51st vote.) Senator Rand Paul of Kentucky says he’ll oppose Graham-Cassidy because even it retains too many elements of Obamacare. So much depends on the three Republicans who caused the defeat of the last Obamacare repeal bill — Susan Collins of Maine, Lisa Murkowski of Alaska and John McCain of Arizona.

7. What would happen in the House?

If the Senate passes Graham-Cassidy, the Republican-controlled House would have a chance to adopt it — but only word-for-word, unchanged. If the House demands changes, they would need the support of 60 senators, which is a near-impossibility. House Speaker Paul Ryan has spoken positively about the bill, as has Republican Representative Mark Meadows, chairman of the conservative House Freedom Caucus. But a significant number of House Republicans come from states that could lose billions in Medicaid money under Graham-Cassidy.

President Donald Trump says he supports it, though he has yet to do any active lobbying. Republicans feel pressure from their base for failing so far to repeal Obamacare — a failure Trump has excoriated them for.

Along with Democrats, several Republican governors in states that expanded Medicaid. Credit ratings agency Fitch Ratings said Friday that because Medicaid spending represents one-third of state budgets, the bill would pose big challenges for them, particularly those that took advantage of Obamacare’s Medicaid expansion.

Democrats and Republicans on the Senate’s health committee are working together to see if they can write a narrow bill to address some of Obamacare’s flaws that threaten to lead to fewer choices and higher premiums for some people who buy individual insurance policies.