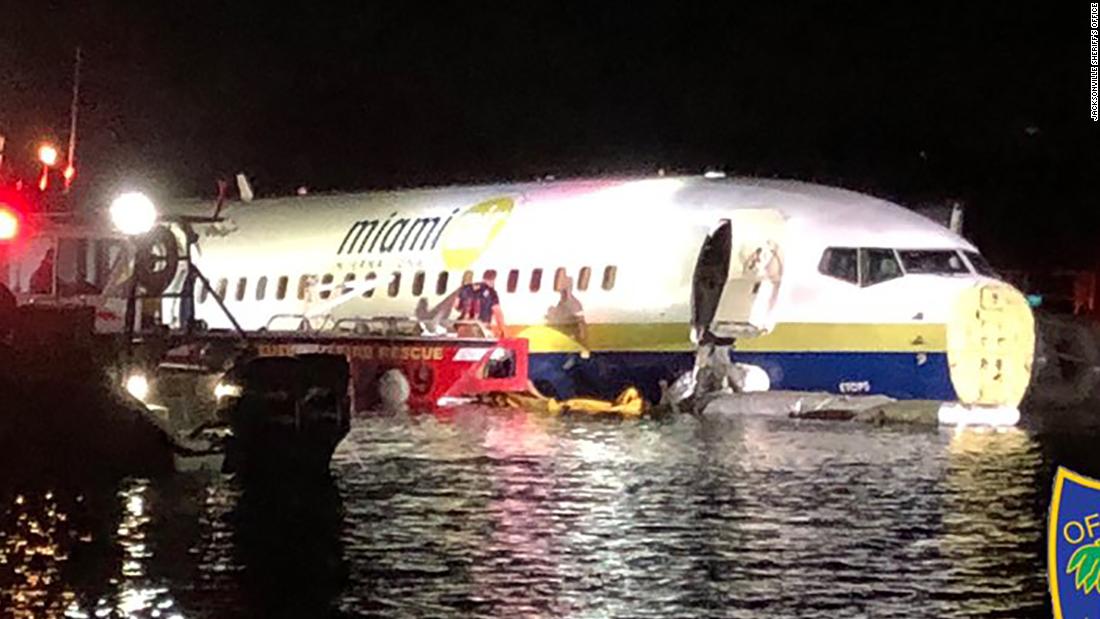 (CNN)Investigators have recovered the undamaged flight data recorder from the military-chartered passenger plane that slid off a runway in Jacksonville, Florida, and into the shallow part of the St. Johns River while landing Friday night, NTSB Vice Chairman Bruce Landsberg said Saturday at a news briefing. 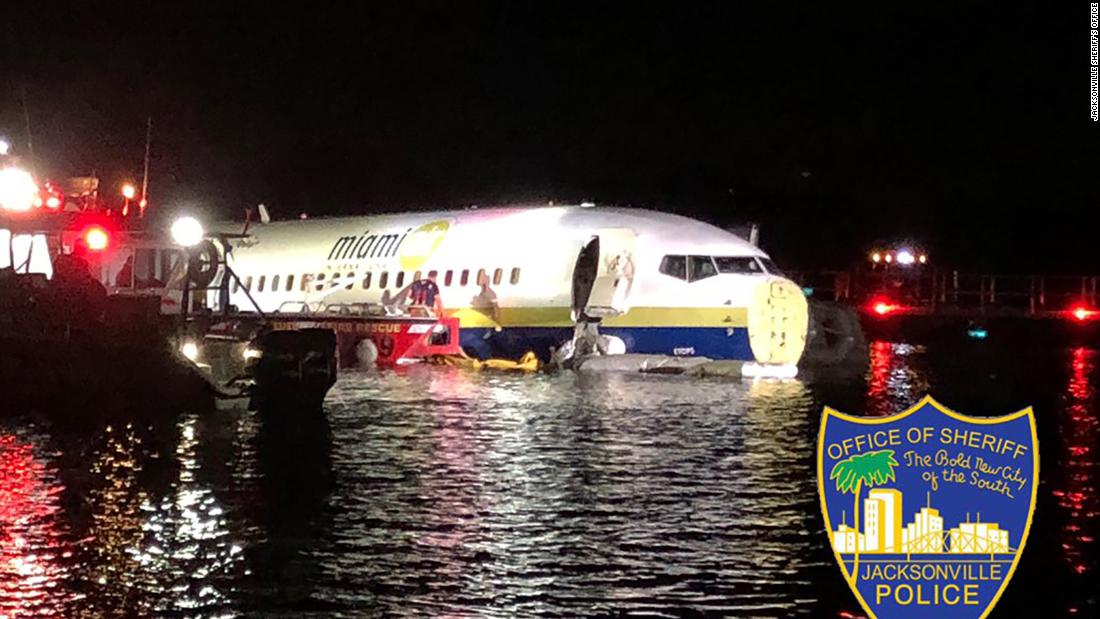 The plane carried 136 passengers and seven crew members from the Guantanamo Bay military station in Cuba. Everyone survived the incident but a few passengers sustained minor injuries, Landsberg said.
The National Transportation Safety Board doesn’t know what caused the landing problem at the Naval Air Station Jacksonville.
The aircraft overran the right side of the runway at the far end and “impacted a low seawall which was made of loose stones and rocks and stopped in the shallow water of the St. Johns River,” Landsberg said.
The plane remained in the water Saturday. 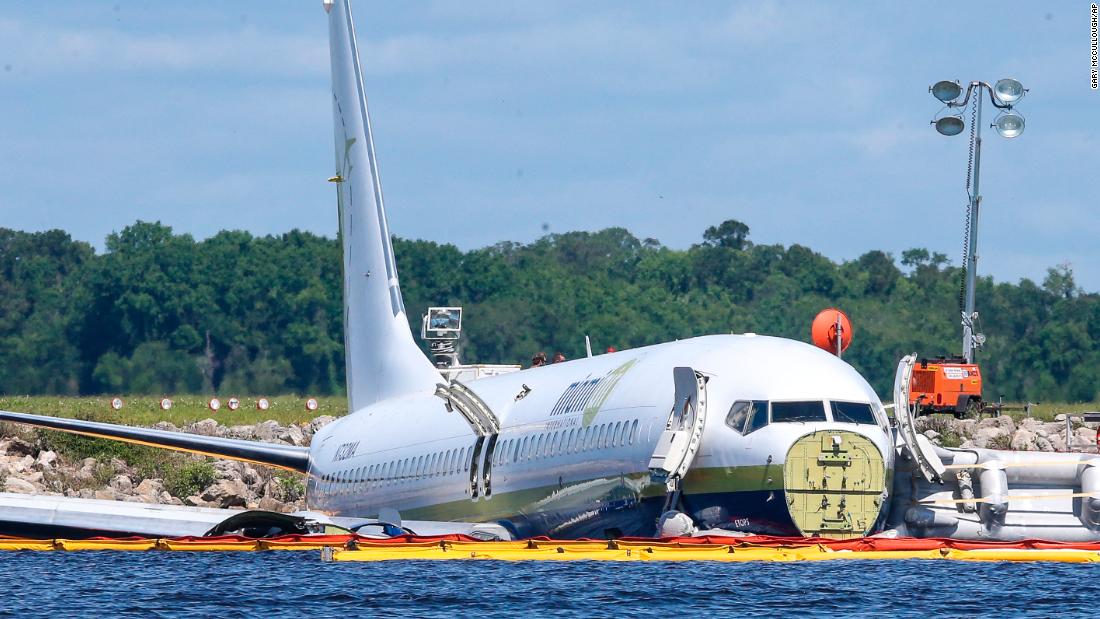 The ungrooved runway pavement is one thing being investigated. A grooved runway allows water to flow off faster than a smooth runway in the event of heavy rain, Landsberg says.
The NTSB is also looking at the human aspects of what may have led to the incident, including the flight crew and the cabin crew. The crew has not been interviewed yet, Landsberg said. Investigators will also look at the airport, weather and air traffic control, he said.
The aircraft operator in the accident, Miami Air International, has five Boeing 737 aircraft, one of which was involved in a hard landing accident in State College, Pennsylvania, in November 2015, Landsberg said.
The aircraft was built in 2001 and had no history of any accidents or incidents, Landsberg said.
More than 900 Boeing 737-800s are in operation in the United States and more than 4,000 in operation worldwide.

What happened to the pets?

Questions remained about pets that were traveling on the plane.
Naval Air Station Jacksonville Commanding Officer Capt. Michael Connor told reporters that first responders concentrated on getting passengers out of the airplane.
“Our first priority was obviously human life — so that was our immediate focus — getting people to safety,” he said.
“I learned that there were pets aboard the aircraft and my heart immediately sank because I’m a pet owner myself and cannot imagine what the pet owners were going through,” he said.
First responders looked inside the cargo bay and did not hear any animal noises or see any animal crates or pet carriers above the water line, Connor said.

‘The plane bounced and screeched and bounced some more’

The plane from Guantanamo Bay was taking active-duty military members, civilian government employees and their dependents back to the United States, Connor said Friday night.
“Some of them were coming back to see their families, some of them were continuing on travel to their homes outside of Florida,” he said.
The plane flew through lightning and thunderstorms on its way to Jacksonville, passenger Cheryl Bormann told CNN’s Don Lemon on Friday.
“As we went down, we had a really hard landing,” Bormann, a defense attorney, said. “And then the plane bounced and screeched and bounced some more. And it listed to the right, and it listed to the left. And then it sort of swerved, and then it came to a complete, like, … a crash stop.”
Some oxygen masks deployed, and overhead bins opened up and sent belongings spilling out. Bormann’s identification, cash, credit cards, computers, phone and passport went flying to the seats behind her, and she could not retrieve them, she said.
Passengers at first had no idea where they were, Bormann said.
“We were in water. We couldn’t tell where we were, whether it was a river or an ocean,” she said. “There was rain coming down. There was lightning and thunder.
“And we stood on that wing for a significant period of time. Rescue folks came, and eventually someone inflated a life raft that had been on the plane, and we began climbing into it. Everybody was helping everybody.”
Firefighters used a cable to pull people on an inflated raft to a nearby pier. At least 50 firefighters were involved in the rescue, said Chief Mark Russo of First Coast Navy Fire and Emergency Services.

A wet runway could lead to hydroplaning

The military often uses charters, so it was likely a “normal military deployment flight,” said retired Lt. Gen. Mark Hertling, a CNN military analyst.
“It sounds to me like it was likely a unit, it was either deploying or re-deploying out of Guantanamo Bay,” he told Don Lemon. “Most Americans think that when military forces move around the globe, they’re always in an Air Force jet. That, in fact, is not the case. Most of the time we use civilian charter airplanes.”
A “weak tropical disturbance” had created scattered thunderstorms Friday evening across northeastern Florida, CNN meteorologist Derek Van Dam said.
“Flying around or through areas of convection can be dangerous as it can create heavy turbulence in the air and a wet runway, leading to the threat of hydroplaning upon landing,” he said.
The White House called to offer help as the situation was developing, Jacksonville Mayor Lenny Curry said.