Somebody has to stop the millennial killing spree before it’s too late and the only thing we’re left with is social media and avocados and- oh god, they’re killing those too. But wait, there doesn’t seem to be any logic to millennial behavior. How can they both be the generation with the worst manners, but also obsessed with political correctness and not offending anyone? Why, it’s almost as if these headlines directly contradict one another, because the whole thing is a crock of artisanal horseshit …

Millennials Are Obsessed With Drinking, But Also Drinking Way Less Than Previous Generations

Millennials are heavy drinkers. According to The Tennessean, they make up a disproportionate percentage of alcohol buyers, and they splurge on the good stuff.

And oh boy do millennials love wine. Bustle reports that millennials buy so much of it that they’re changing the industry. Humans have been drinking wine for 8,000 years, but it took women in their 20s posting about it on Facebook to take it to the next level. Why do they love wine so much? USA Today argues that it might be because it’s the healthiest of alcoholic beverages, and the increased heart health quiets the demons after three glasses. 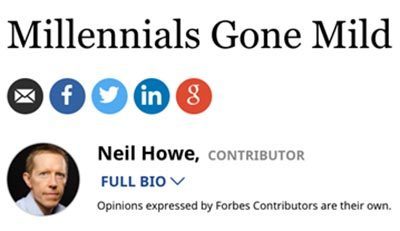 Or wait, actually, millennials aren’t drinking as much as previous generations. This Forbes article (named “Millennials Gone Mild” *fart noise*) tells of bars and nightclubs closing en masse, as millennials prefer to go out to sober events like “juice crawls,” or stay home altogether. The author goes on to say “Over the past few years, Millennials have started identifying as ‘grandmas’ and ‘grandpas’ when they stay in for the night — a lifestyle choice revered by most members of ‘Generation Yawn.'” Somebody revoke this man’s word license.

Oh, and millennials couldn’t afford to drink, even if they wanted to. Business Insider has concluded that they’re also killing the beer industry. Even wine sales have flatlined.

So millennials are obsessed with drinking, particularly high-quality alcohol, to the point where the industry is changing to accommodate them. But at the same time, they’re not drinking as much as previous generations, because they can’t afford it and they’re all doing sober juice crawls wherein they butt-chug ginger shots, causing bars to spontaneously explode. They’re drinking less beer, but record amounts of wine, but also wine consumption hasn’t increased in the past year. Why can’t they drink exactly the right amount?

Millennials Don’t Vote, But They’re Voting For All The Wrong People

This Big Think article starts with “Hey, you. Yes, you. Millennials. Stop twerking for a second and listen up.” That’s a sure way to gain the respect of your reader! The piece goes on to argue that millennials don’t vote because politicians don’t represent their interests. They go on to say that millennial voter apathy is because they have “no faith in populism,” a claim so powerfully wrong that many of your eyes have just rejected it outright. But the core of what it’s saying is correct, right? Millennials don’t vote because nobody represents them. Otherwise, they’d be passionate.

The Wall Street Journal thinks millennials are passionate about voting, but that they’re misdirecting their passion. Young people gravitated toward Sanders and Trump in the last presidential election, which was against their own best interests, the paper argues. Both of their economic policies would be bad for long-term growth, which millennials would know if they’d stop asking for “free stuff” long enough to read a goddamn book. So millennials don’t vote because nobody appeals to them, but when they do, it’s because the wrong people are appealing to them. Gotcha.

Millennials Are Too Involved In Their Children’s Lives, But Also Not Involved Enough

Millennials are the new “helicopter parents,” hovering over their children and providing exciting aerial footage of all their most precious police chases. According to Elite Daily, millennial parents will supervise all of their children’s interactions, preventing them from developing a sense of creativity. And they’ll fix any problem their child has, depriving them of the chance to fix it themselves. Millennials are smothering their children.

Alternatively, if we check in with ABC, we find that millennials are too focused on “me time.” Their parenting style is vastly different from the helicopter parents of previous generations. Their children lack structure and supervision because they’re too busy Snapchatting their Instagrams. The article also weirdly states that “Millennial Moms are 21 percent less likely to send a thank-you note via postal mail.” And why aren’t these goddamn kids sending singing telegrams anymore?

Millennials Don’t Work, But Are Also Poisoning Their Companies With Their Workaholism

Millennials are more stressed out about their jobs than other generations. Glamour reported that they are too occupied with their careers, their only goals being to “get a new job with better benefits, more pay, better hours, and more work-life balance, as well as work that was more intrinsically rewarding.” Truly, this is unheard-of stuff.

Wait a minute, it turns out millennials want material things, but aren’t willing to work for them. The Miami Herald says that millennials won’t take a job that’s too hard, and they refuse to work overtime. “Stay an extra two hours at my job as a mattress nap tester? Who do you think I am, the Wolf of Wall Street?”

But The Herald also claims that millennials are “work martyrs,” the hardest-working people in the workforce. They refuse to take their allotted vacation time because they’re too goddamn addicted to working. If only these job-stressed, lazy work martyrs could take a week off, they’d learn how a real adult handles their job — by drinking schnapps in their car during lunch and writing about millennials twice a week.

Millennials Blow Too Much Money, But Are Killing Whole Industries By Not Spending Money

A BankRate study found that millennials are spending way too much going out to eat. They go to Starbucks too often, and have large bar tabs (except when they don’t). All these little expenses add up and eat into the money they should be saving for retirement.

This irresponsibility has spread into other areas. This Is Money reports that in addition to ordering too many meals, millennials are overspending on expensive clothes. It looks like if these millennials don’t learn to go without spending money on frivolous things, they’ll never be able to support themselves.

Or wait, millennials are in fact to blame for the severe sales slump at chain restaurants like Applebee’s and TGI Fridays. This Business Insider article states, “Millennial consumers are more attracted than their elders to cooking at home, ordering delivery from restaurants, and eating quickly, in fast-casual or quick-serve restaurants.” Those monsters!

And it doesn’t stop with dining out. Millennials are also killing the motorcycle and diamond industries. CNBC hypothesizes that the slump in sales is due to millennials’ tendency to value experiences over material goods, that they “seek out experiences, such as vacations and concerts, that they can post about on social media.” Rest assured that it’s not because they’re broke and can’t burn tens of thousands of dollars on a shiny rock and a loud bike; it’s because they’re narcissistic and need to brag about their trip to Argentina on social media. Also, no one’s ever bragged about their diamond ring online, right guys?

Millennials Never Leave The House, But Are Also Everywhere (And That’s Awful) 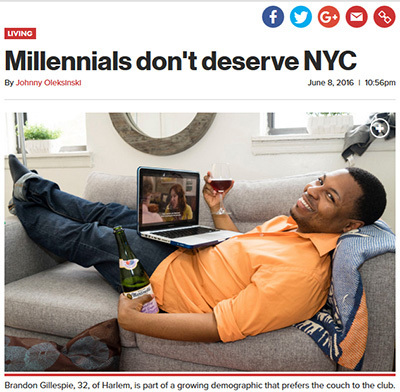 The New York Post is worried about millennials. They spend too much time at home, leading to an upswing in depression. Instead of going out to the bar with their friends or meeting a date for coffee, they stay home and binge-watch TV. The Post warns of the emotional dangers of “Netflix and chill” — which, if you recall, was a euphemism for sex before the olds got to it.

And yet the same New York Post is mad that millennials are going out too much, railing against millennial “brunch culture” — that is, that millennials will go to restaurants to eat brunch. But wait, isn’t that good? Instead of killing restaurants? Not so fast — the problem the article has is that these goddamn kids will hog tables for hours and obnoxiously take pictures of their food instead of silently, angrily nursing a hangover, as God intended.

National Review came out with the hottest take their scientists could engineer, combining every millennial stereotype into a super-take capable of triggering every lib, and perhaps killing male feminists outright. They argue that millennials dislike capitalism because they are ignorant of what it truly is (and that they like socialism for the same reason). They go on to say that capitalism doesn’t care for their puny gender or racial identities, which scares millennials right into Bernie Sanders’ arms.

Meanwhile, The American Spectator is too busy dunking on progressives to buy into the myth that millennials hate capitalism. Capitalism brought them iPhones and Uber, the popularity of which proves millennials love the free market. They also go on to claim that millennials don’t know what socialism is, because that seems to be some sort of journalistic nervous tic.

The Washington Post calls millennials the “Participation Trophy Generation,” participation trophies being the ultimate symbol of entitlement. We were so afraid of hurting any child’s feelings that we got rid of winners and losers, and now an entire generation is growing up unprepared for the competitive real world.

The Blaze
Millennials: “Glenn Beck is ruining our grandparents.”

Glenn Beck’s rag The Blaze agrees, pining for the days when there was only one trophy, handed out to the winner, and those who came in third or lower were summarily executed.

The Federalist claims that millennials’ lust for participation trophies has bled into the workplace. They say that millennials, especially women, want promotions the same way they want trophies: whether they earned them or not. If only they weren’t babied so much at soccer games, maybe millennials would be better human beings. A competitive football game is what made the Greatest Generation great and the Baby Boomers boom, right?

This HuffPo article starts with “Youth sports: a chance to run around, play sports with friends and have fun … At least that’s how it used to be.” But now youth sports culture is so demanding and competitive that kids are emotionally and physically drained, with most dropping out by age 13.

Washington Post
“Take it easy, kid. If you don’t get a trophy for losing, then we won’t get to spend a lifetime berating you for it.”

The consequences run even deeper, though. Sports are so intense now that kids are getting injured like never before. That comes from The Washington Post, the same people who coined the term “Participation Trophy Generation.”

Man, it’s almost like these writers just hate the younger generation because they’re trapped in old, failing bodies and growing increasingly irrelevant to society by the day. But that couldn’t be it. That’s too far-fetched. No, it is the avocado’s fault, surely …

David Klesh was born in 1980, but refuses to call himself a millennial. His writing has also appeared on the Faith Hope and Fiction blog. Dan Hopper is an editor for Cracked, previously for CollegeHumor and BestWeekEver.tv. He fires off consistent A-tweets at @DanHopp. Adam Schwallie has a Twitter, where he tweets in between destroying all of the industries that Baby Boomers hold near and dear to their hearts.

You know what Millenials aren’t killing? These dope Caribou Boots that you can use to continue to not kill industries with because that’s an unfair characterization of a generation of fun-loving people.

If you loved this article and want more like it, please support our site with a visit to our Contribution Page.

Also check out This Millennial Rant Deserves A Trophy For Being Most Wrong and 5 Reasons Millennials Should Destroy The Concept Of Marriage.

Subscribe to our YouTube channel, and check out How These ‘Entitled’ Millennials Want Jobs That ‘Pay,’ and watch other videos you won’t see on the site!