Sometimes jobs go out of style. The world has no more need for rat catchers, travel agents, or Circuit City employees. However, when certain jobs die, they take a singular skill set with them — meaning we may soon see the day when no human alive can remember the ancient technique of how to repair a VCR. In fact, when it comes to the history of human knowledge, we’ve probably forgotten more skills through sheer ambivalence than any kind of malice. Here are a few things which we’ve forgotten why we ever needed, and which we are currently in danger of losing forever.

On a tiny island off the coast of Sardinia lives an old lady who happens to be the world’s only manufacturer of an ancient cloth known as “sea silk.” It’s the rarest textile on Earth, and the only way to obtain it is to find this island and discover her workshop, where she freely gives it to all who have braved the journey. That makes it sound like a pretty sweet RPG sidequest, but there’s probably one thing you should know: This epic loot is made out of spit.

Every spring, Chiara Vigo goes diving in the waters surrounding her island to gather the raw material for her silk, which is the solidified saliva, called “byssus,” of a particular local species of clam. And somehow she weaves this mollusk drool into fabric, possibly using witchcraft.

via Mondo Sardegna/YouTube
“Your nana’s Christmas sweater game ain’t got shit on me.”

Of course, Vigo didn’t randomly stumble onto this technique while collecting clam spit as a hobby. Sea silk is an art form that goes back to Ancient Egypt. It was the finest fabric known in antiquity, coveted not only because it shines like gold when held in daylight, but also because it was said to improve your fortune and fertility. We’ll never know what desperate (and suicidal) tailor discovered this disgusting process, but it’s so difficult and time-consuming that over the ages, fewer and fewer could be bothered to learn it. Now, only Vigo still raids clam gums for residue to make this soft gold.

Due to sea silk’s rarity, as well as how delicate and beautiful it is, she could probably make a trillion dollars selling curtains to Saudi princes. But she and her family actually live on welfare, refusing to sell the cloth at any cost, claiming it would offend God to monetize “the soul of the sea.” Instead, she gives it away. But before you submit an order for three yards of the stuff, it’s also in incredibly short supply. It takes Vigo 200-300 dives just to gather 200 grams of byssus. So anyone hoping to nestle cozily under a bedspread made of mollusk drool is out of luck.

German-born Australian lens crafter Achim Leistner possesses a rare, weirdly specific talent. It’s believed that he’s the only person on Earth with the ability to craft perfect spheres. And we mean perfect — Leistner can make a sphere of pure silicon so incredibly round that it’s exact down to the point of a few nanometers. If he had created the Earth, even Mt. Kilimanjaro would only stand a few feet high. Take that, God.

And that mastery is exactly what the kilogram needs. You see, the metric system of measurement is maintained to an incredibly precise standard. Right now, the kilo is the only type of metric measurement that still has a physical prototype — precisely weighted lumps of material against which all other produced weights are tested. The daddy of them all is the international prototype kilogram, or “Le Grand K,” an expertly measured bundle of platinum and iridium located just outside of Paris under lock and key. But it appears that those precautions still aren’t enough, because the special K is somehow managing to lose weight. That’s bad news for scientists, because they’ve technically agreed that this doesn’t mean the kilogram is getting lighter, but that the entire Universe is getting fatter. 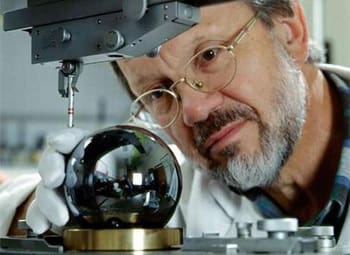 However, if scientists could obtain a silicon sphere which weighs exactly one kilogram down to the molecule, they then could count the number of atoms in that sphere and come up with an unalterable universal standard once and for all. This is where Leistner comes in, because he could possibly create a perfect ball of silicon. He thinks of this craft as “massaging atoms.” It’s a painstaking, months-long project which involves polishing a ball so delicately that he’s knocking a mere few atoms off the surface each time, and then feeling for irregularities with his fingertips, which are supposedly so sensitive that he can feel molecular structure by touch alone.

But we have to hurry. Leistner is already in his 70s and still hasn’t found a single apprentice who can do what he does. And this is one job robots aren’t stealing anytime soon. No technology we can create can do what Leistner achieves with his own two hands and some relatively mundane workshop equipment. So here’s hoping he completes his ultimate masterpiece before his spirit is recalled to that great silicon orb in the sky.

Ask any top journalist working with sensitive information about how they keep their communication secret, and they’re likely to namedrop something called “GNU Privacy Guard” (GnuPG). It’s widely regarded as the greatest encryption software ever made. When Edward Snowden released his cache of classified documents to the media, he did so with the help of GnuPG. Without this bit of software, we’re back to carrier pigeons and tin cans with strings if we want to communicate without the government peeping in. Which is why it’s really bad that its creator is about to get his internet shut off.

GnuPG, the great protector of privacy, is one dude in his home office in Erkrath, Germany. Werner Koch is the sole designer, programmer, and owner of the most highly recommended email encryption software on the planet, and he makes less safeguarding our human rights than he would flipping burgers. In fact, he’s constantly going broke, and relies on meager donations to afford to keep making patches and updates for the damn thing.

In 2015, Koch revealed in an interview that he was about to give up and get a regular job when the Snowden thing happened, at which point he decided that his software was too important to abandon just for the sake of, you know, feeding his family. In order to help as many people as possible, paying to use GnuPG is optional, like with WinZip. And so, like with WinZip, almost nobody ever pays. On average, Koch makes around $25,000 a year (often less) on one of the most important pieces of software in history.

Luckily, he barely manages to keep afloat with the occasional funding drive. The 2015 interview earned him a particularly big windfall, as it drew the internet’s attention to something that was, holy crap, kind of a big deal. But as of June of this year, he’s had to start another donation drive so that he can keep protecting the world’s most high-profile whistleblowers, rather than take a more lucrative job selling bratwurst from the back of a food truck.

Imagine if you were suddenly tasked with writing the dictionary. Where do you even start? The first word is “aardvark,” right? What comes after that? Hard to remember, because you’re 84 and your memory isn’t great. Didn’t we mention that? Also, you don’t know how to use a computer, so you need to figure that out even before you start. Oh, and if you fail, your language is lost forever. No pressure.

Before European settlers came to North America and went Hulkamania on the natives, the Wukchumni tribe of central California numbered in the tens of thousands. Today, the tribe is dying out. Only 200 people remain, and of those, only one knows their traditional language. That’s 84-year-old grandmother Marie Wilcox.

Understanding that her rapidly approaching expiration date will instantly erase millennia of human knowledge, Wilcox decided to write a dictionary, knowing that she’s the only person who possibly can. As you’d imagine, even Wilcox’s memory of how to speak Wukchumni isn’t perfect. She hasn’t had a conversation in it for decades, what with there being no one else on Earth to have one with. She must search deep into her old-person memory banks to resurrect all those words she hasn’t used since before her bones started aching when it was overcast.

Despite these challenges, Wilcox has managed to almost complete her work, thanks to painstaking effort and the support of her family. It took seven years for her to produce a draft of her dictionary, but she isn’t done, as she continues to expand and refine it. We can only hope she remembers all the swears.

Arnold Hadd and June Carpenter live solitary lives in a tiny town in rural Maine, and they’re not particularly interested in media attention. They’re rather ordinary people, for the most part, but in January they became high-profile news for an unusual reason: After the death of their friend Frances Carr, they became the final two members of an entire religion.

Hadd and Carpenter are the last two members of the “United Society of Believers” church, historically nicknamed the “Shakers.” Once consisting of thousands of believers, the other Christians of Europe didn’t like the way that the Shakers’ worship of Christ very subtly differed from their worship of Christ, so they were forced to escape to another continent which was only trying to murder them in much less prejudicial ways. But what was their crime against (mainstream) God? Well, they were progressive well beyond their time, which is just asking for trouble. At their core, the Shakers believed in absolute universal equality between the races and sexes. Before the American Civil War, they were the first church to allow black people to join as equals. Sure, that’s the branch of Christianity we needed to get rid of.

Also, the Shakers were very inventive, and as any good Christian back then knew, inventions were the Devil’s way to trick you into secularism. They invented the flat-broom (as opposed to the traditional bundle-of-straw-taped-to-a-stick method), as well as the first mechanical washing machine, known as a wash-mill. They came up with methods of making clothing waterproof and wrinkle-resistant which were so effective that they are still in use today. They invented the circular saw, as well as several more innovative farming methods. They invented the wood stove. And they shared all of this new knowledge with the world for free, because they thought patents were un-Biblical.

So what happened to the Shakers? Tragically, they’ve been defeated by one really ill-advised part of their dogma: Thou Shalt Not Bone. The Shaker religion is one of absolute celibacy, so the only way someone can join is through conversion. They cannot make more of themselves, not even if they’re the last two left. Shakers are the sectarian equivalent of pandas. Now we’re sad. 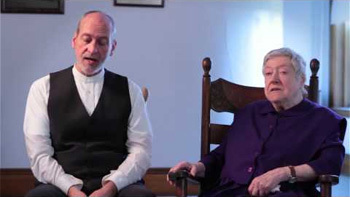 Membership began to plummet after the Civil War, to the point where Hadd and Carpenter are the last ones left. So unless we can convince them to do a congregation-building pelvis collision (which would be dangerous at their age anyway), they’re going to need a hell of a membership drive.

S. Peter Davis is the creator of the Three Minute Philosophy YouTube series, and is the author of the book Occam’s Nightmare.

Also check out 4 Vital Pieces Of Pop Culture We Lost Forever and 7 Lost Bodies of Work (That Would Have Changed Everything).

Subscribe to our YouTube channel, and check out How Robots Already Tried (And Failed) To Take Our Jobs, and other videos you won’t see on the site!

Get intimate with our new podcast Cracked Gets Personal. Subscribe for great episodes like What You Don’t Know About The Opiate Epidemic and How Illegal Drugs Saved Our Lives, available wherever you get your podcasts.